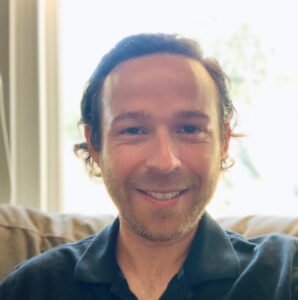 Austin began delving in music at the age of 15 but many years before that, he was found playing many games on NES and then Super Nintendo where he began to really like video game music from games like Final Fantasy III & Chrono Trigger as well as many others. The music was an important element in the storytelling.  This was what influenced him to pursue composing altogether. His love for music also extends to a lot of Rock music in general from such bands as Led Zeppelin, U2, The Police, Radiohead and a love for Progressive Rock from such acts as Yes, Marillion, Pink Floyd, and Porcupine Tree/Steven Wilson.

He began working with a group from Digipen, a video game school founded by Nintendo, to gain experience composing game music. Two projects called “Fight Zone”, a first person shooter and “Kisses” a social simulation game were released. Kisses was nominated as one of the top 10 “IGF -Independent Games Festival Competition Finalists”.

Austin’s next game was on a grand scale for an adventure game by Phoenix Online Studios originally called King’s Quest IX, based on the classic series, now called “The Silver Lining”. This project  has been split into 5 episodes consisting of hours of orchestral music. Austin is the lead composer and has received tons of praise for the music that brought the game to a whole new level. His music also was used for The Silver Lining – Haunted Castle Experience which features VR support.

Next was a very different project creating music for Cognition: An Erica Reed Thriller, an original IP developed by Phoenix Online Studios which also is in episodic format. The game consists of 4 episodes and is a mix of CSI and Dexter with a very memorable main character you play as named Erica. The music received many rave reviews on it’s role and impact in the game and won several awards including Best Music of the year and a Reader’s Choice award from Adventuregamers.com.

He has also explored film by working on “The Way He Makes Them Feel” and a project called, “An Inconvenient Penguin” which received great acclaim for its score.

Austin is an ASCAP member now writing, not only game scores, but songs for vocalists and other instrumental works, including his own albums titled “Music On Canvas” & “Evening Light” exploring different musical landscapes, peace, and inner harmony. Delving into vocals and lyrics, he has also produced his own albums “Part of the Story” and “Inner World”. He has also collaborated with Jon Anderson (singer of YES) writing songs together.

Need a powerful or intimate emotional score for your project?

Let me know what your needs are and what budget you have in mind for what you want to achieve. Price/rate depends on time, what type of music, and how you want it delivered. The more information, the better it will be to assess what is possible.

If you have any questions or comments, don't hesitate to contact me. I look forward to hearing from you!